Working uncover narcotics I have seen many people arrested on possession of controlled substance. These individuals are all too often sent to jail as a temporary spin dry forcing sobriety. They leave the jail with nowhere to go but back to what they know and where they are often arrested again. I’ve learned that what we’re doing isn’t working. Simply put, treatment isn’t successful for many people primarily because there is a mental health component to addiction that can’t be addressed in jail. I have researched other counties and found that there is success in drug courts. 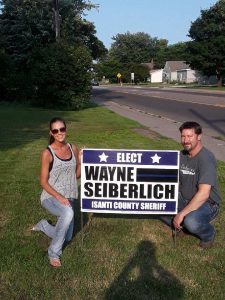 I believe in progressive long-term thinking for our community. I support the idea of an intensified supervised release of individuals with possession charges where probation keeps a constant monitor, where probation and law enforcement can randomly test individuals in the program to assure sobriety, where these individuals are treated for addition and received the mental health component of that treatment, where they are assisted in finding and holding jobs, and where they must participate in community oriented events and education of youth. This program does not apply to anyone dealing drugs.

What are the benefits? On average a person undergoes treatment multiple times before, and if ever, successful. These are all too often the ones committing burglaries and thefts to do what they can to support their habits. If a drug diversion program through drug courts can help in achieving sobriety and reducing recidivism rates then I believe drug use in the county will be less as will burglaries and thefts. By helping them we help ourselves.

I have faith and love for the children in our community. I believe that education is essential as our children face new drugs and new trends. I am supportive in reimplementing the DARE program in our schools. This also allows our youth to be acquainted with officers and see that they aren’t what the media can often portray. Building rapport with children can only benefit as they grow. A quote I once heard and fully believe in is that by building strong children we will stop fixing broken adults! Added police in our schools also protects our children further in this time where school violence is all to prevalent.

I support the Triad program, something I had first discussed when announcing candidacy which has now been implemented. Community awareness for our elderly who are targeted victims of scams and frauds is essential to their protection! This too is an outstanding opportunity for the Sheriff’s Office to be proactive in community involvement.